I am a full stack web developer. Love tinkering all the time, especially anything javascript related.

If you went to Playwright.dev and looked up the documentation on how to setup playwright to run on Circle CI you are mostly given the option to run a docker image provided by microsoft and thats about it.

However, the specific codebase I was working on had some special nodeJS engine requirements which made it all the harder to use the docker image by Microsoft which was lacking any documentation of configuration options, literally. 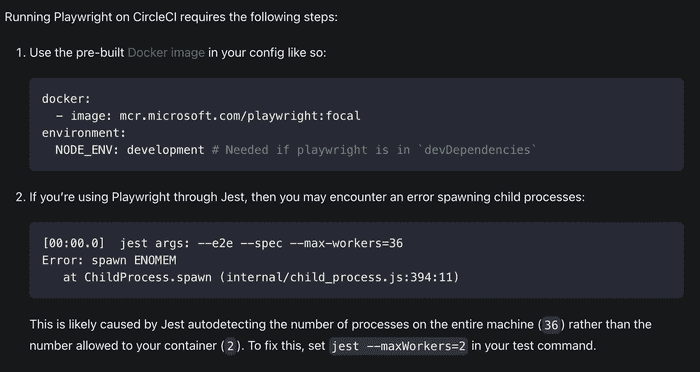 All you see in the screenshot above is all you get in terms of documentation.

This left me no option but to manually setup the configuration needed for running playwright on CircleCI.

The result is the following

The crucial bit that got me some time to figure out, is that Playwright is using patched versions of chromium, webkit and firefox and hence using a random browser orb from Circle CI wouldn't do the trick. So this line shown below is very important

To setup the reporter and video recordings apart from doing so above in config.yml you also need to set the paths in playwright.config.js so don't forget to do that.

All in all, it was an interesting journey but I would love for microsoft to give more attention to the documentation for CI/CD.